Polo Described in a Nutshell The objective of the game is to move the polo ball down the field, hitting the ball through the goal posts to score a goal. Every time a goal is scored the teams will switch side, so don’t be surprised if you see a team aiming to score what in football would have been an ‘own goal’. Play is kicked off by the umpire performing a ‘throw-in’ at the beginning of each Chukka and after each goal. The team with the most goals at the end of the match wins. 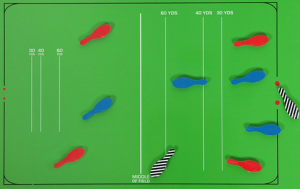